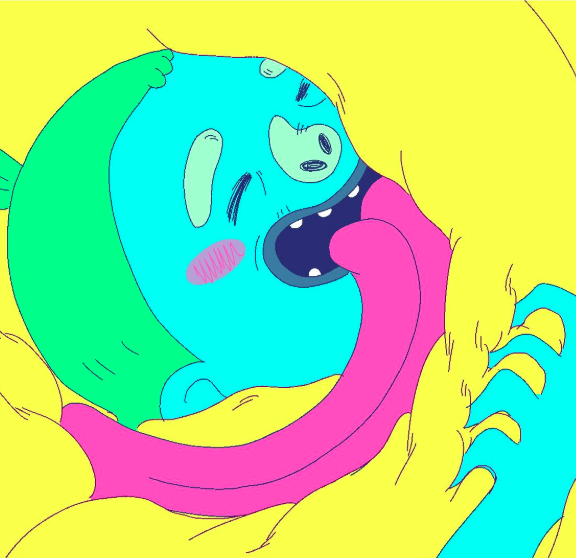 Last weekend, I went to a screening at the ICA of short films about sex…

Specifically, short animation films made by women about sex from a female perspective. The event was appropriately named: ‘Drawn By Desire – Women’s Animation on Sex’.

An hour and a half lay in store of refreshing, funny, informative, sensual, quirky, celebratory and sometimes uncomfortable viewing of female sexuality that harnessed the female gaze. A perfect Saturday afternoon in my eyes, and I was thrilled to see my all time favourite clitoris-related animation in the line up:

Afterwards, I managed to grab some time with Duncan Carson – the man who curated the screening and program. He said of his choice of films: ‘The films I picked for this programme were the ones I thought stood out as offering a different point of view I hadn’t seen elsewhere.  I think the last ten years or so of filmmaking has seen a real explosion in women making this kind of work, and it’s not something I’d seen put together in this context.’

Perhaps unsurprisingly, many of these films shed light on the lack of information and openness about female pleasure, working hard to normalise open conversation around authentic female sexual experiences and bodies. Here’s one film doing just that:

I asked Duncan his opinion on how the female gaze in these pieces of work affected the usual, male-focused perceptions of sex we see in much mainstream cinema: ‘ I think in general there’s a broader view of what sex is, outside of the spectacle of it and more about the experience of it. These films go deeper into touch and texture than I think you would find in most men’s films. The level of detail, where the shots can go, how bodies can transform to one thing to another is a big difference.’

Here’s another diamond from the screening:

I’m already a fan of animation, but this unique form of story-telling really comes into its own whilst exploring sexuality in film. Animation enabled these film-makers to explore the vast scope of female sexuality in malleable, textural and inventive ways. They visualised bodies using playful and sophisticated techniques that live action could not achieve with real actors. Within the realm of sexuality and film, animation allows for experimental storytelling that can illicit fantastic, dream-like and outrageous images about sex, whilst harnessing real-life emotions and stories.

Here’s Anna Ginsburg’s ‘Private Parts’ doing just that. Imagine the obstacles trying to do this with live-action!

Duncan adds: ‘I did a project a few years ago with women animators primarily working in the ‘70s, people like Sally Cruikshank and Suzan Pitt. There was this consistent story of being sidelined in other areas of art making, of men squeezing you out, either from opportunities before they got started or even when you’re on set as the director. Solo animation lets you do things without that kind of interference. I’d like to think that things have moved on a bit from then, but it’s probably not that much easier. Sex is such a sensitive topic and having someone looking over your shoulder is hard. Animation lets you do things more privately, to explore your ideas without judgement, and also to approach topics that are painful if you were to involve actors. Especially when you’re talking about trauma, there’s an argument – even in the age of intimacy directors – that it’s a lot to put actors through that. But the bottom line is that this work is really fun and unexpected!’

You can find out more about the films, and see the program on the link below. It would have been great to have seen more films from the point of view of gay and trans-gender women, but I commend the ICA, and Duncan, for bringing these entertaining, creative and feminist set of films to fore: