‘Flapz’ and ‘Willy Hole’ : Can you label your bits? 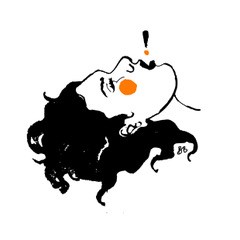 So, following on from last week’s post … I think we have safely established that the diagrams that I printed off for my focus groups were of VULVAS, not vaginas. Tick.

My lovely, willing attendees took to the task with initial vim and gusto. However, scratching of heads would usually start to ensue followed by sighs of struggle, giggles of ignorance and for some, feelings of discomfort.

Turns out that the ‘vulva/vagina’ debacle is not the first pot-hole in the plane of knowledge that women have of their own fangitas. Truth be told, many of my participants knew diddly-squat about their own intimate biology. And I wasn’t that surprised. Google practically put together these labelling exercises for me: I really couldn’t tell you my cervix from my uterus.

Here are some of the results chosen at random: 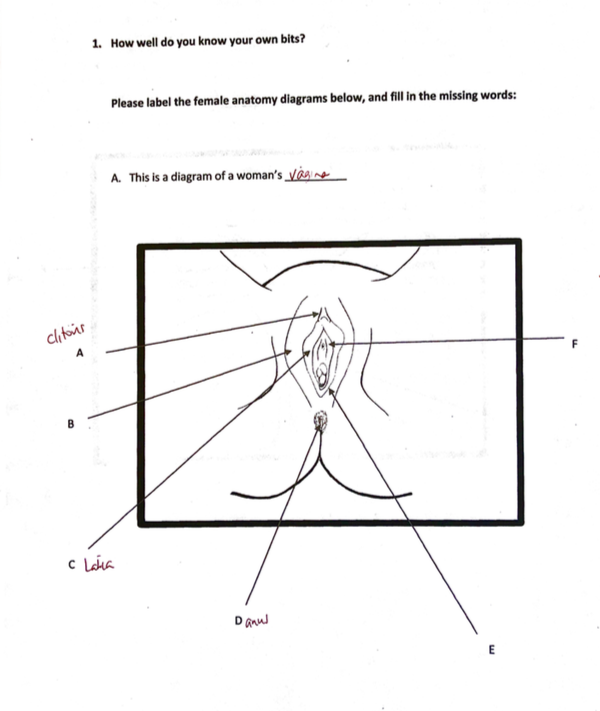 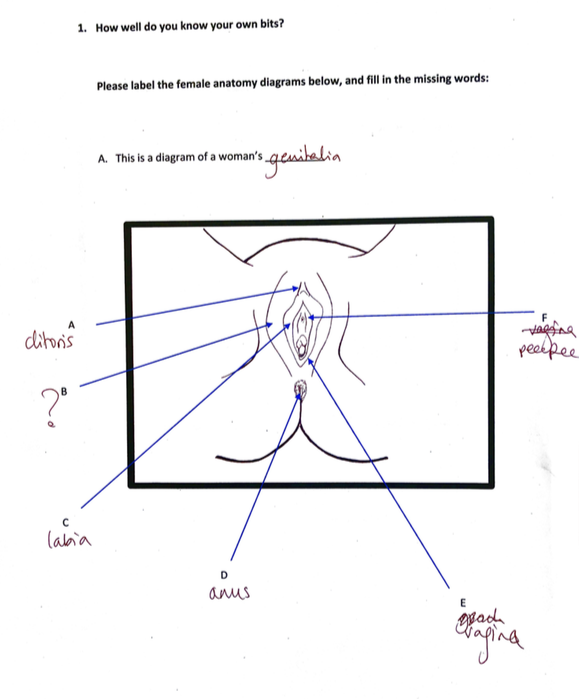 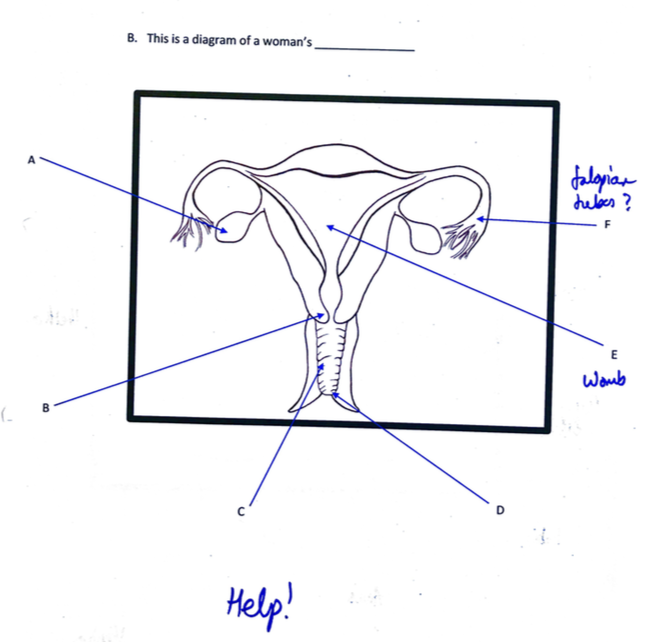 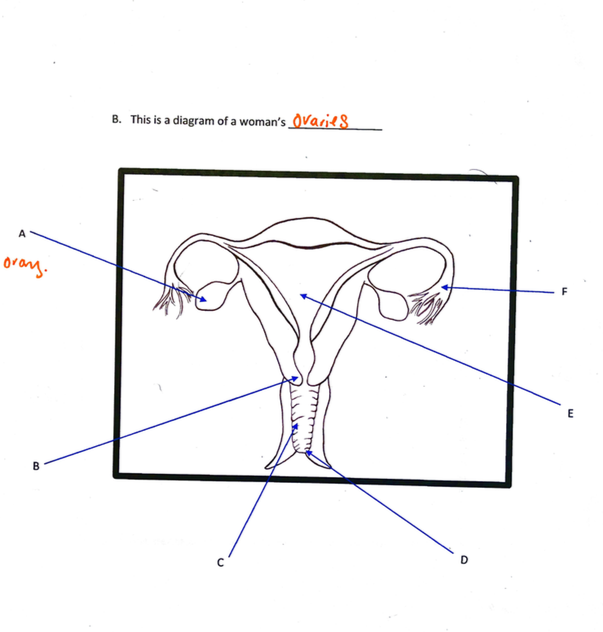 Of all the women who attended the focus groups – twelve in total – only one could label the internal reproductive system correctly. Three women could label their vulvas correctly, although two of these women didn’t know that it was called a vulva. 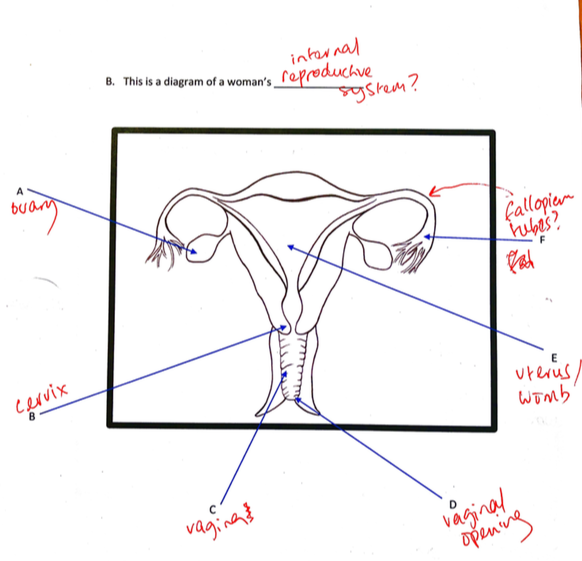 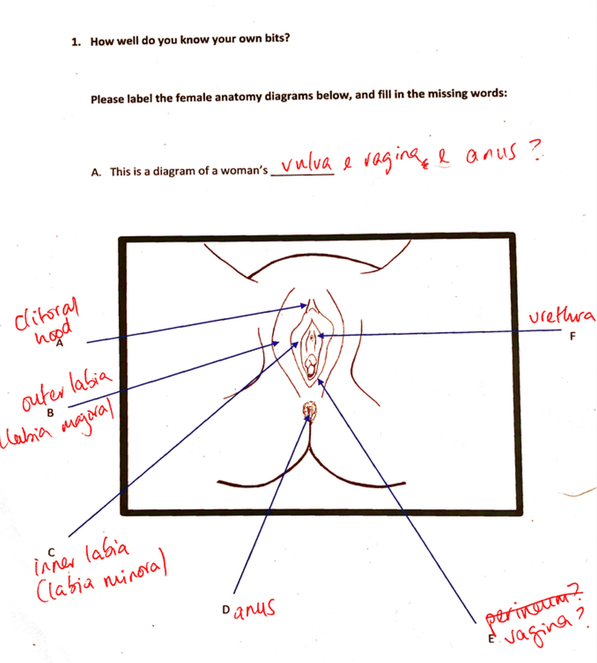 Wading through the focus group results, I was suddenly worried. The sessions were mainly comprised of friends and colleagues I coerced and bribed to come over in exchange for croissants and coffee at my flat. Hardly an accurate cross-section of society, and it suddenly crossed my mind: are my friends and I the only confused ones whilst everyone else is labelling vulvas and ovaries with flair and panache, left right and centre, behind their backs and with their eyes closed? Could all other women choose reproductive biology as their specialist subject in EggHeads? Were we the weakest link?

Some frantic Googling later, and it turns out that my accumulated results are in fact in keeping with a British poll conducted last year by charity The Eve Appeal…

The results? Nearly half (44%) of women surveyed couldn’t correctly point to the vagina, while 60% couldn’t label the vulva. Less than a third of women were able to correctly label all six labelled parts of a woman’s reproductive system.

Conversely, the Eve Appeal survey found that 70 per cent of women could correctly identify the foreskin, penis and testes!

I showed my boyfriend some of the results of my focus groups. ‘Does it matter if women can’t label their vulvas (YES! VULVA! WELL DONE BOYFRIEND!) and their reproductive parts?’ he asked.

Well, my friends. I think it does matter. In the same vein as the vulva/vagina argument (see my previous post to read my argument), it suggests a confused population of women who are not educated properly about their bodies. Which is hardly surprising. The overwhelming majority of the 500 women who took my survey learned about sex via their friends, the media or their own experiences. Schools, educational books and parental information fared lightly in comparison.

In addition to misconception and confusion … If we are not at one with our bodies, or feel embarrassed/icky/nonchalant about them, we might not detect if anything abnormal is going on. According to The Eve Appeal, nearly a third of the women surveyed said they wouldn’t feel comfortable talking about or showing their vulva to a doctor.

‘This combination of ignorance and embarrassment could be costing lives,’ says The Eve Appeal.

So, it appears that school-girl giggling and a simple bit of mislabelling really do have wider connotations.

My favourite author, Isabel Losada, wrote in her book Sensation: ’We live in an age of so much information yet how is it that so many of us know so little?’ It’s a big question that I’m constantly musing, and will attempt to pick apart throughout this season.

In the meantime, I say: let’s try to feel less abashed, let’s get more curious, let’s get better acquainted with our bodies and embrace our glorious selves in the whole.