Sex After An Abortion 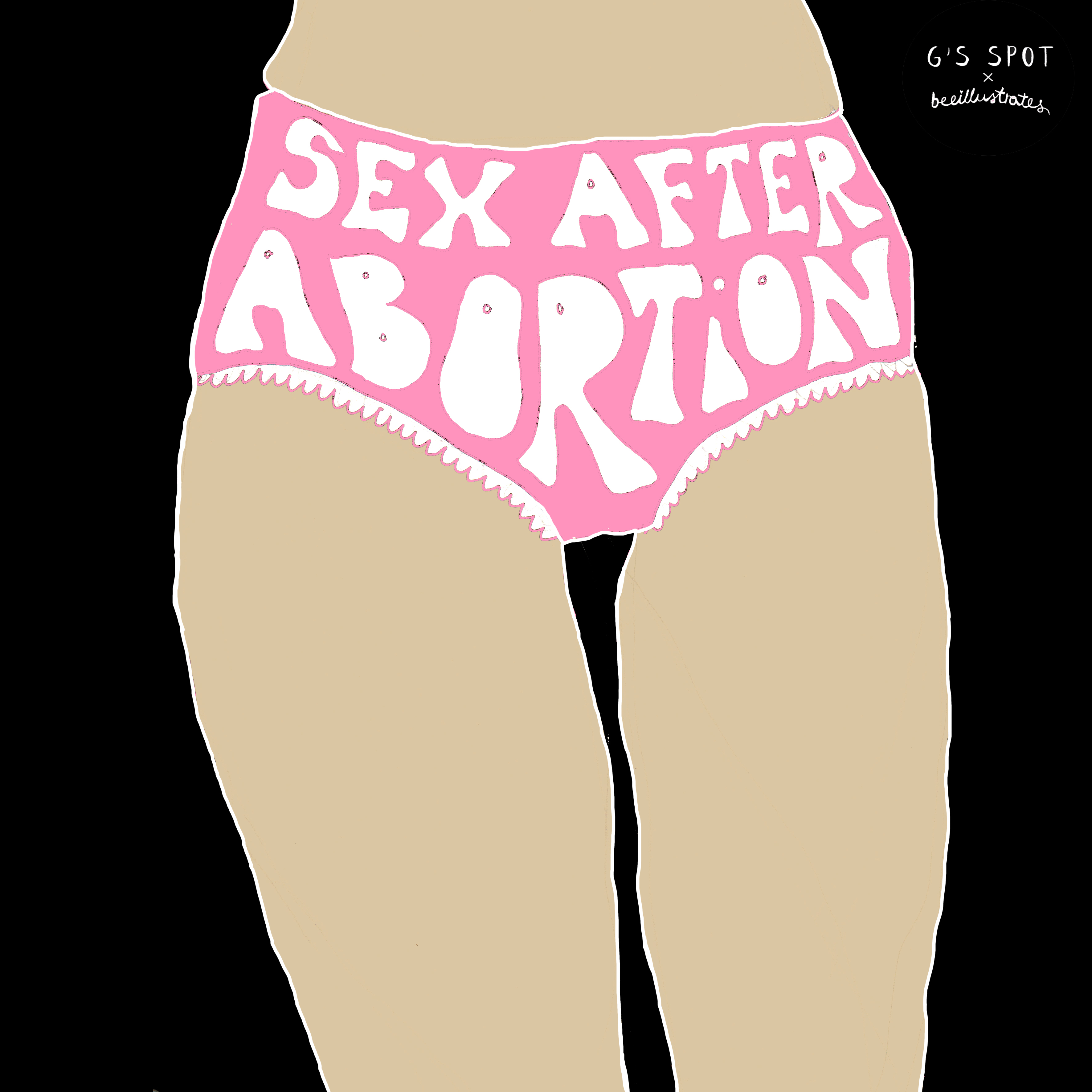 This is my story about sex after an abortion.

I found out I was pregnant last April.

I found out during the summer between my second and third year of university, whilst I was living back home with my dad and working an intense summer job.  I was suddenly so tired all of the time and then one morning I couldn’t stop throwing up at work. I just knew I was pregnant. An at-home pregnancy test confirmed it. I was 20 at the time.

My relationship with my boyfriend before I found out I was pregnant and had the abortion was really, really good.

We met in the first year of uni. He lived opposite me in halls! Our relationship was strong, and we were moving in together for our third year of university. It felt like everything was on track. We were probably having sex five times a week! And it was great!

When I found out that I was pregnant, my boyfriend was living at home in London over the summer whilst I was at home in Exeter.

I told him right away, as well as my parents and best friends – who were all very supportive.

My boyfriend is very family-orientated, and a lot of his family members have had a child really young. So, his initial reaction was ‘amazing news, this is fantastic!’

But I wasn’t sure.

I weighed it up in my head, and I just thought “Not now. I have all the time in the world to have a baby.” It just didn’t feel like the right time, for me.

It was a decision I didn’t take lightly. It really played on my mind every day. It wasn’t a particularly good time: I probably cried every day. It took me a month to make my decision and to opt for an abortion.

When I told my boyfriend that I didn’t think that having a baby was something that I was going to decide to do, he was very upset. He told me that it was his decision as well, and that half of it was his. Which is 100% a valid opinion to have but at the end of the day, it is my body.

We didn’t see eye to eye.

And he couldn’t bring himself to face me.

So, he didn’t come and see me until after I had the abortion. He just couldn’t face it. But we would speak on the phone every day. And I did feel like I was supported. We didn’t talk about the abortion a lot, but he would always ask how I was and how I was feeling. And I felt so supported by my family and my friends, and my colleagues too.

Overall, I felt that I had good support from doctors and the NHS medical community about the abortion itself.

My appointments were easy and speedy experiences, with friendly and experienced staff.

I was given lots of leaflets and a lot of information. They focused on the different ways to proceed with the abortion and the different types of contraception they could give me afterwards. In my final appointment, I was given a number for a counsellor should I need it, but it wasn’t impressed upon me and I never called them.

And all of these took place.

Sex Immediately After the Abortion

I first saw my boyfriend after the abortion, after things had settled. I suggested a mini-break: it had been such a stressful summer and I just wanted us to go away together.

We went to Bristol. I booked an amazing hotel for us for three nights. And all we did was have sex. Non-stop!

It was great and I felt a lot better – I thought things would go back to normal and I didn’t need to worry anymore.

My body had changed, due to the pregnancy and the abortion. I lost a lot of weight: I just wasn’t hungry because I felt sick all the time. For dinner, I ate a third of what I usually eat. I craved food, but when I ate it, I felt really sick. A vicious cycle! At the same time, stretch marks had appeared on my stomach. I felt so aware of them and very self-conscious. They looked like a little cradle of where the baby would be, that’s how I interpreted them. I really didn’t want my boyfriend to see them, so I did everything that I could to hide them. With time, I stopped this, I couldn’t give a fuck in the end! But in the beginning, I was very self-conscious about my changed body.

Leaving our lovely weekend in Bristol, I felt reassured – I felt that moving in together in third year would be fine, we were on track, we still had a great connection and our relationship was all OK.

However, that wasn’t the case.

Sex After the Abortion: University

We moved in together, but our sex life changed. It felt that whenever we had sex, he didn’t want to have sex with me. He would initiate it, but then he zoned out when we started having sex and gave the impression that he didn’t want it – which was confusing because he had initiated it! It would be over within minutes. And then he would just leave the room.

By this point, we’d known each other for two years. It felt uncharacteristic and strange, and it also made me feel like shit.

Talking about sex is not something I usually do. Never in-depth with my friends, or even with my partner. But I could tell something was up. And it went on for quite a long time, a couple of months. I felt that I couldn’t talk to him about it, because I knew it had something to do with the abortion, and I knew that his opinion about it was so different to mine – in his mind, we should have kept the baby. My boyfriend is a bit on the autistic spectrum – so sometimes empathy and sympathy aren’t his biggest forte – he can’t put himself in another person’s shoes sometimes.

On top of this, I was grappling with changes in my body and within my sense of self. My body was still adapting to the pregnancy, as well as me terminating it: it was trying to compute that it wasn’t seeing out the normal term of a nine-month pregnancy. My hormones were all over the place, all the time. And that hadn’t happened to me before. I’m usually happy-go-lucky and care-free and I don’t usually let things weigh me down. But at that time, I felt a lot more down about things: I was constantly asking whether I had made the right decision and whether I could have done things differently. It was always playing on my mind and I was digging myself a hole that I found hard to pull myself out of. On the outside, I put up a front that I was absolutely fine. But then I would go to bed and cry for hours.

My boyfriend realised that I was depressed and encouraged me to see the counsellor at the university.

When I saw the counsellor, I found that I wanted to speak about my sex life after my abortion, not the abortion itself. It was the sex that was making me really upset, and it was reminding me of what happened over the summer. However, I didn’t feel comfortable talking about sex with my counsellor on account of her age (she was quite a lot older!) and also because I just didn’t click with her. I’ve never had counselling before, so I didn’t know that you could ask for a session with someone else. I only went to one session in the end.

I eventually confronted my boyfriend about what was going on. It was after we had sex, he was about to get up and leave the room, and I just forced him to stop and sit down and talk to me about it.

He admitted to me that he still felt love and desire and attraction towards me, but once we started having sex he said that he couldn’t get the thought of his mind that something was once inside me which was then taken out.

Quite a weird, deep thought to have during coitus!

But he said he couldn’t stop thinking about it, really graphically, in his head, during sex. And this is why sex together was so affected.

So, moving forward, we decided to give each other some space. I decided that we shouldn’t have sex for a bit. For about a month we just let it be. It helped wounds heal and we slowly started moving past it.

Building back up to us having sex, we went slowly, we took baby steps. I was quite cautious. Other than the stretch marks that appeared on my stomach, I felt fine about myself sexually. I just wanted to help him come to terms with what happened and to feel comfortable with sex again.

Talking about it really helped.

Communication is so, so key. We need to be able to talk about sex with one another! Especially with the person, or people, we are having sex with.

We are in a much better place now. We are both about to graduate and we both are moving to London soon – me for work, him for a masters.

My advice for others

When I was looking for information online about relationships and sex after an abortion, the only things I found that were semi-related were message boards about miscarriages, with a focus on losing a baby.

When I saw that G’s Spot was doing this project, I thought: ‘there must be so many other girls who have had abortions, who are really young, who haven’t been given any advice other than contraception…’ I wanted to reach out and share my story about sex after abortion. People don’t talk openly about having an abortion and their experience of it, which is strange because SO MANY women go through this.

My advice to others would be to open up honest conversations about your abortion and how you have been affected by it with the people around you, and the people you are having relationships with. You need to self-care. You need to let other people know you are going through a tough time, and you need to be honest about what you are experiencing.

When my boyfriend and I started speaking to each other about what was going on for each of us and talking about the cracks in our sex life, it was a big turning point for us.

Looking back, this was a very defined chapter of my life that was all-consuming. I’ve slowly worked through my guilt and difficult feelings around it, it’s been a journey.

We are never taught communication skills, especially when it comes to sex. So, it’s hard to do and we have to learn as we go along and find our way through. Just know – opening up and talking really helps. Neither of my boyfriend and I are in a place where it upsets us anymore, thanks to us talking.

If you have been affected by any of the issues raised in this article about ‘sex after an abortion, there are services that can help you. As a British blogger based in the UK, I have provided the NHS support page here which can direct you to the correct service for your needs.