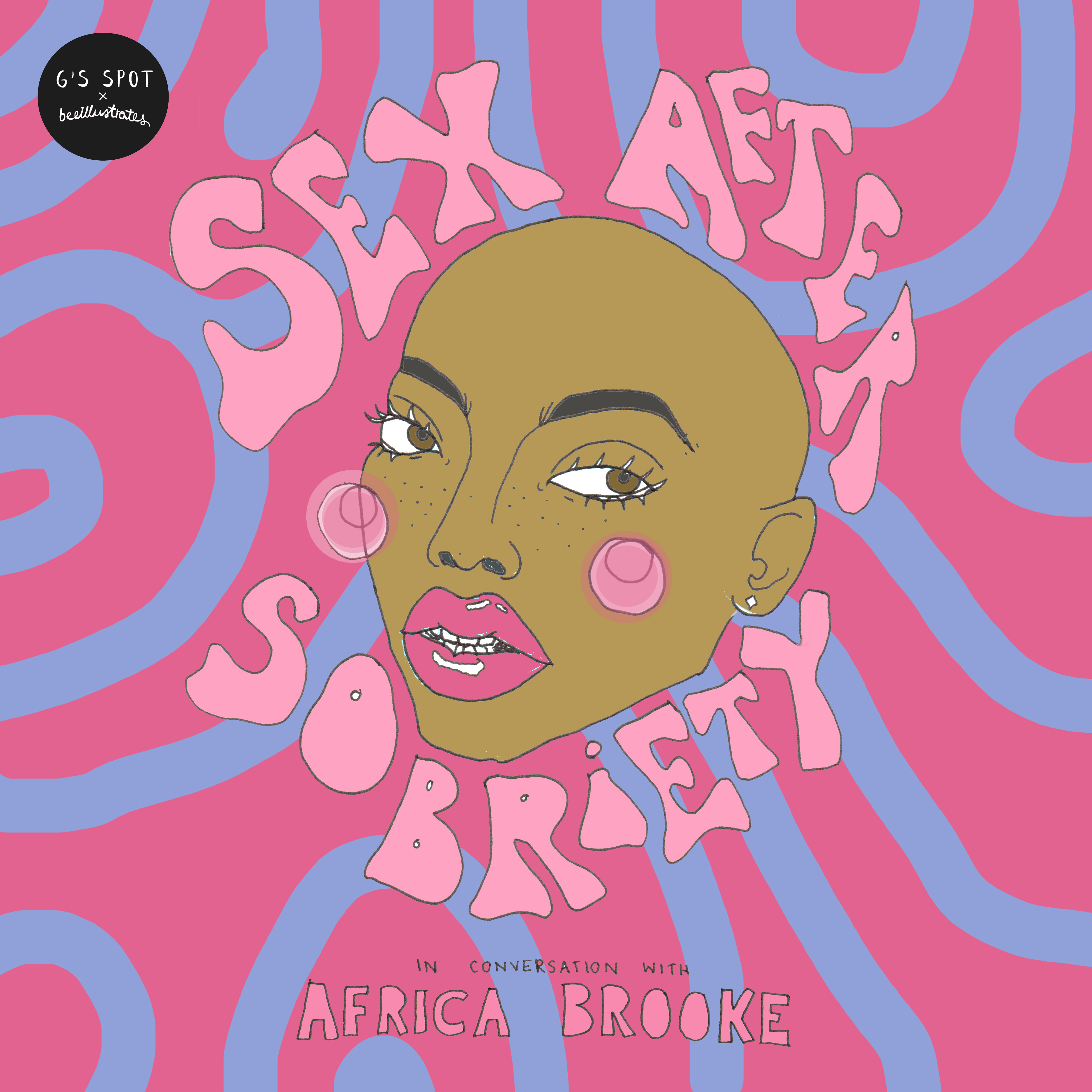 Africa Brooke is a mindset coach and speaker, a sobriety advocate and the founder of The Cherry Revolution movement that aims to break societal norms surrounding female sexuality by making shameless pleasure a priority. She’s also wise. Very wise. Here are her astute insights on Sex After Sobriety which she shared with me over some tea and hot cross buns at G’s Spot Towers.

My relationship with alcohol before sobriety

And I always emphasise that it was my eighth attempt at sobriety.

I think the main reason I relapsed seven times is that alcohol was the glue for most of my social relationships with people. Whenever I was going out, alcohol would be there. I didn’t want to lose that connection with my social life.

I started drinking when I was 14. From the very first time, the intention was to get drunk. And that pattern stayed with me throughout my time drinking. Regardless of whether I was at a baby shower or at a wedding or just a quiet lunch, the desire to get drunk was always there.

Getting drunk meant that I didn’t have to think about my insecurities. I had very low self-worth for a lot of reasons, and I had a lot of unhealed trauma stemming from domestic violence. So, by the time I tried alcohol for the first time, it just silenced all of that. I could just be. In the moment. I could adapt to whoever was around me. That became the thing that I got hooked on. It was never about the alcohol; it was about what it could do. I think that’s why I kept going back.

My drinking problem showed up via blackout, which happened almost every time that I drank. I was able to hide it very well – I never stumbled, I never vomited, you could look at me and think I was completely fine. At the time, it was difficult for me to see that there was something wrong because I wasn’t drinking every day or even thinking about alcohol every day. But every time I knew I was going to be in a social space, I felt like I had to drink in order to navigate the social situation: to feel more confident, funnier, more desirable. And when I drank, I would go full force.

I did try to moderate my drinking, after I got myself into dangerous situations – getting into cars with men I didn’t know, going out with my friends and leaving them, ending up in someone’s bed, with no idea how I got there. All of these things happening in blackout. Yes, I could just have one drink, but it would feel like torture. The intention and deeper commitment I had was to get drunk. It was all or nothing.

I had sex for the first time when I was 14 and alcohol was involved. It was something that the boy that I had sex with offered to me, as a way to relax me. It was consensual in the sense that I knew that we were going to have sex and it was something that I agreed to, but I was evidently nervous. I remember it was a whiskey. And just from having 3 sips, I felt relaxed – even if it was a placebo effect.

That’s when I started to link alcohol and sex together. I clung to the narrative that for me to be relaxed, in order to experience sex, alcohol needed to be part of it. That’s something that stuck with me for as long as I was drinking.

I was in a three-year relationship when I made the decision to become sober. But when I met my ex, I was 22 and it was one of the worst years for my drinking and blacking out.

When we first started dating, we had a lot of sex, but it was always alcohol-fuelled. Drinking unleashed a sexual part of myself because it lowered my inhibitions, I stopped judging myself for what I was doing, and I stopped feeling self-conscious. In fact, I didn’t feel anything. That was the state when I felt the most sexually free.

Any time I was sober, we rarely had sex. Or when we did, I was only doing it for him. I made my body available to him but emotionally I wasn’t there.

My complicated relationship with sex was fuelled by sexual shame that I was holding onto, that started building up when I was younger.

Religion was a very big part of how I grew up. I was raised in a household where there were a lot of Christian values and things like sex were just never discussed. I never saw my parents hold hands, even kiss. I never saw that intimacy, but it was normal, and I didn’t question it. I remember when I was six years old, my mum found me rubbing my clitoris on the corner of the couch. I wasn’t deeply aware of what I was doing, I was simply behaving like a child: discovering something that feels good and then exploring it even further. Children start masturbating from a very young age, unconsciously! So that’s what I was doing. My mother was deeply disappointed in me. I truly believe that’s when my sexual shame was created because I started to internalise the fact that I shouldn’t touch myself in that way. I internalised: “Good girls don’t do those things. God’s child doesn’t do that.”

But of course, I didn’t stop touching myself throughout my youth! But any time that I did, I’d feel shame, I’d feel guilty, I believed that I’d done something wrong and that there was a white man in the sky watching me, ready to punish me. This followed me into my teens. Any time I experienced an orgasm or touched myself in any kind of way that aligned with sexual pleasure, I would feel ashamed.  So, alcohol was a way for me to silence that shame and to feel the sexual connection that I wanted.

I used to believe that alcohol was something that I would always need for the rest of my life, in order to experience sex and be my fuller self in any kind of way. I think one of the biggest reasons I relapsed so many times was because I was genuinely scared that I was never going to have sex again. That I would never be able to experience intimacy again.

Sex after sobriety was tough.

I was two years into my long-term relationship when I made the decision to be sober. What followed was a transition from me initiating alcohol-fuelled, wild sex to me getting sober and not wanting to be touched. I just didn’t want any sex to happen.

Obviously, I couldn’t keep that up for too long. Especially since I was in early sobriety and going through a process of self-discovery, of changing everything that I thought I knew, of getting to know myself from scratch.

It forced me to start looking at my own relationship with myself, in terms of sexual pleasure.

I started ordering books online and exploring tantric literature, which is when I came across the book Women’s Anatomy of Arousal by Sheri Winston. That book allowed me to see that I didn’t have to feel shame. That even though I internalised it, I could re-train and re-program myself to actually value my own pleasure without a partner. Because I knew that I couldn’t try to be liberated through someone else because my shame stemmed from the idea of owning my own pleasure. It was the beginning of a big journey for me, and I fully immersed myself in it. I was reading, I was going to workshops, I was listening to talks – just really trying to make myself understand where my shame came from and how to get rid of it. My relationship came to an end around this time. I realised that I had been having unconscious sex, not just with him but with all my sexual partners to date. Sex – I understand now – that I didn’t even want to have.

Sex Three Years After Getting Sober

The way that I have sex now in sobriety is completely different. Because first of all, I am fully present. I’m fully aware of what’s going on: of my own body, my partner’s body, the fluids, the smells…And that’s proven very important in accessing my own pleasure.

I’ve been having sex in sobriety for three years. I still get moments of feeling a little bit uncertain because there are things that I now enjoy which previously I internally shamed myself for doing. For example, I used to slut-shame myself for giving oral sex and it was never something I could do whilst sober. I think a lot of people can relate to this – it’s not a coincidence that oral sex is often the ‘go-to’ when someone has been drinking a lot. You don’t judge yourself for what’s happening when drunk. But now – whilst on my sober journey of sexual pleasure and liberation – I can genuinely enjoy giving my partner pleasure. Receiving pleasure is something that I’m still working on truly harnessing because I know that I still have some shame to work with…But it’s not as powerful as it was before.

Now that I am sober, I am committed to slower living, which also feeds into my sex life. I want deeper connections and I want things slower. I want more intention. And that’s not something I made room for when I was drinking. Slow living has connected me to sensuality and purposeful pleasure.

My Message to Others

I would say, always realise that you can choose differently.

If you know that alcohol or drugs are stopping you from making informed decisions and from knowing yourself intimately, make a conscious choice to let it go.

And yes, it will be very uncomfortable but unfortunately, growth is not supposed to be comfortable. It’s called growing pains for a reason! But on the flip side, you start to get to know yourself much better. You’ll find that you’ll know what pleasure looks like for you. You’ll know what feels good and what doesn’t. You will know that if you put forwards your boundaries they will be respected because you respect them for yourself. But it is very difficult to get there if you keep on choosing your blackout drinking, if you keep on choosing the way that you abuse drugs…

Discomfort is one of the best things that happened to me. We need to get rid of this idea that everything needs to be comfortable. It’s really a very entitled thing to think that you have to be comfortable but can also grow at the same time.

I want people to know, you’re not going to get it right the first time. Whether it’s sobriety or something else. It took me eight times! But if you keep on trying, and you just wade through that discomfort, you will meet yourself in a way that you never thought possible.

If you have been affected by any of the issues raised in this article about ‘Sex After Sobriety’, there are services that can help you. As a British blogger based in the UK, I have provided the AA support page here. The AA is a global support group and you will be able to find local AA meetings in your area if you are not based in the UK.

Submissions for my ‘Sex After’ series are still open – please get in touch if you would like to share your story.