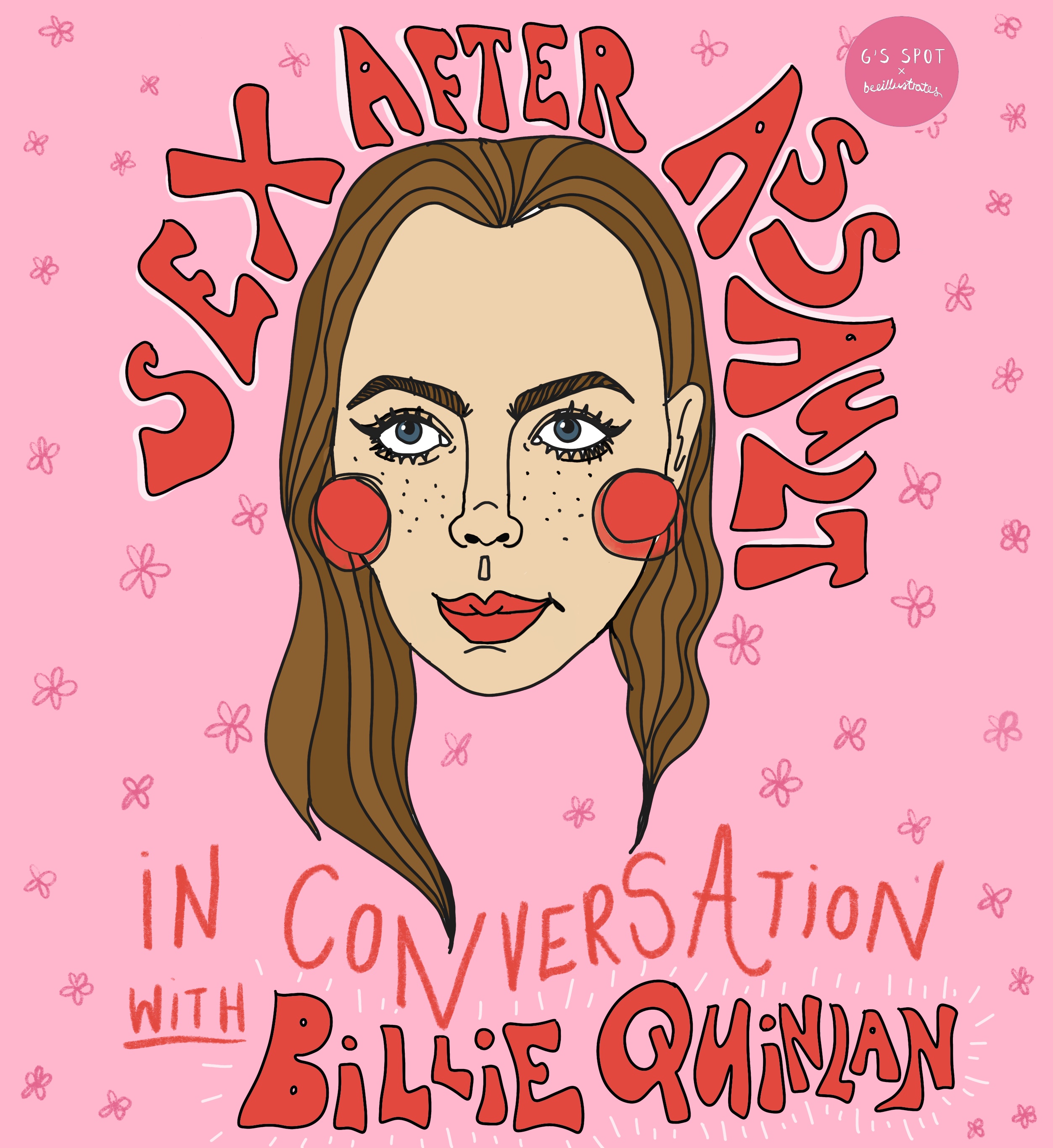 Georgia’s note: This story focuses on the experience of sex and sexuality after sexual assault. But to help contextualise the reading, the heroine of this piece was assaulted by a senior colleague whilst working in London, in the “city” (aka finance industry), who coerced her into having a drink with him after their end-of-day meeting.

After the assault, I was so embarrassed. I kept thinking: ‘Oh my god, how could I let that happen to me? That’s so embarrassing, I’m such a fucking idiot’. I went into full self-blame mode:

YOU went to the bar with him.

YOU set up the meeting with him in the first place.

YOU have a flirty personality.

YOU probably led him on.

YOU should have shut the conversation down.

YOU shouldn’t have had the drink with him.

I didn’t tell anyone about what happened. I told myself that no one would believe me, that it was such a ridiculous story, that I would be thought of as a woman crying wolf, trying to be part of the #metoo movement or trying to make myself interesting. We only get taught about one version of assault and violence – that it’s a surprise attack and that it is violent – and so this didn’t feel like a proper incident to get upset about.

After blaming myself for a long time, another incident happened in the office. The same man who assaulted me asked me, in the middle of the office with senior colleagues present, to walk past him: ‘I love seeing your legs in that dress’. Not a single person said anything.

There were a few other instances like that too: sleazy, unwarranted, uncomfortable episodes carried out by older men, taking advantage of my female identity and my sexuality. Again, no one spoke up.

All these incidents just compounded.

Afterwards, I became incredibly self-conscious. For the following months I was terrified of eliciting any kind of attention. I started dressing in black, I stopped wearing makeup, I was hyper-aware of myself, I lost my voice, I lost my confidence, I didn’t know how to be around men. I was really afraid of my personality because I thought everything that had happened to me was my fault – that I came on too strong, too flirtatiously, too much like a woman…

I wasn’t sleeping with anyone when the assault actually happened but a few months later I got back together with a guy I was on-off dating for seven years.  I never told him what happened and I still haven’t told him.

We tried to have a sexual relationship but I just couldn’t do it. We tried to be quite slow – we tried things like massage and being a bit more sensual. He would always try to focus on me rather than him. But that made me feel so tense and afraid and it just felt like my vagina had literally closed up.

The worse time was when he organised a whole weekend away, which was probably four months after I was assaulted.

I was so afraid of having to have sex and to make matters worse, I felt that he had organised this weekend away for one reason only: to have sex with me.

I had created this narrative internally that my sexuality was the only value I now had as a woman. This was the story I started telling myself after the incident: “the only reason that you got this job is because you’re a woman and you make the office more interesting by giving it a sexual dynamic, the only value that you bring is one of being a sexual person, you’re not intelligent because if you were intelligent this wouldn’t have happened, you didn’t get hired because you’re good at your job, you just got hired because you’re a pretty woman who’s willing to entertain men…” A large part of my job involved entertaining – going out with clients, new business etc – so I felt like I was being rolled out as some sort of sexual facilitator.

Anyway, we went away for that weekend and I just thought: “Fuck, I have to do this for him, because he deserves it and it’s my role and that’s what I’m here to do.”

So we started having sex and halfway through I knew I was going to cry, it was horrendous. I flipped over so that he could do me from behind and wouldn’t be able to look at my face. I was crying my eyes out. It was so painful but I was trying to make sexy noises because I told myself that I had to moan, to make him feel like he was doing a good job… All the while I was crying into the pillow.

I went into a very, very dark place… My depression really impacted my sexuality, as did my new fear of my sexual self.

Our relationship was really difficult because there was no intimacy and there was no touch. We didn’t have a sexual relationship at all. And we never had a conversation about it. Every now and again, as a gesture, we’d grin and bear it. And I really mean that, in the worst kind of way. We’d have sex but neither of us would be enjoying it. We did it because we felt we had to have sex to have a relationship. I remember looking into his face and him looking back at me, both knowing that neither of us were experiencing any pleasure, that we were doing it because of some sort of societal pressure to “have sex”.

This all completely destroyed my self-worth and I think that’s a big thing that I’ve learned about sexuality and about sex after trauma. Assault destroys your sense of self because sex is so much more than the physical act. It’s intertwined with our wellness, our self-esteem and self-regard. After assault, you have to rebuild all of that to know that you are so much more than something to have sex with.

My boyfriend and I broke up eventually and I started seeing someone else, who retrospectively was a bit of a dick to me. However, my self-worth was so low that I found myself letting him treat me like that.  He would dominate me in the bedroom and I would just surrender. And it felt really good. But it was not the kind of sex I’d ever had previously and there was no intimacy in it either.  After sex, he would immediately go into the shower, wash, get into bed and go to sleep. There was never any cuddling or kissing. I was aware that it was weird, but at the time it worked for me because I was relieved that at least I was able to have sex in this relationship.

Funnily enough, I did actually tell that guy about my assault. He didn’t believe me though. He told me those types of things didn’t happen. I don’t know why he said that, he was essentially calling me a liar. What did he get out of negating my story? I think maybe it was because he was an investment banker and he didn’t want to be associated with an industry, a career and friends within that culture where sexual assault takes place. It’s easier to deny it rather than confront it.

My personal healing started when I enrolled on a 3-month program around career change called ‘Escape the City’. That program literally changed my life, it made me do so much self-development and I started feeling better in my own skin and about my value as an employee.

I eventually reported my assault to HR. I heard rumours that the man who assaulted me was trying to assemble a young, all-female team to work on a project with him and it was then that I knew I had to say something. I felt stronger after doing so much self-work and I had stopped worrying about getting fired or it ruining my career – I knew I couldn’t stand back in case something happened to other women. I remember the conversation I had with the head of HR. She was the first person that I disclosed my assault to and I couldn’t look at her. I put my hand around my face and cried my eyes out whilst I told her everything. It was the hardest conversation because I was fucking embarrassed.

FYI, the company (unsuccessfully) tried to move me to New York – in my eyes, it was a quick fix, a way to remove the problem. And it took another year before the man (who assaulted me) was asked to leave the company.

I didn’t begin my sexual healing journey until almost a year later.

I embarked on a new career focused on health coaching, which then developed into me building a business around sexual wellness. It wasn’t until I started speaking to experts and ‘everyday’ women about their sexuality, as part of the research I was doing for my business, that I was forced into confronting my own. I didn’t actually realise that my own sexuality was still an issue.

The research really made me look inwards, it made me ask a lot of questions of myself and my own experience: what I thought I believed and what I was still holding onto. It also forced me to start owning my sexual narrative and to confront what happened to me as sexual assault. I realised that I really didn’t want to be someone who had been sexually assaulted. I thought that it made me seem damaged.

A big turning point was when someone asked me: ‘why do you hate men?’ It really shook me because it made me confront the fact that I was still holding onto so much anger towards men. I got really irritated by them, I found them frustrating and indignant and I didn’t want to be alone with them.

I realised that there were a lot of unresolved issues that I needed to explore and unpack, even if that brought up a lot of uncomfortable feelings and conversations.

I am still going on that journey.

But I have now been in a relationship for a year. It’s the healthiest relationship I’ve ever been in. We still have to do the work together around our own sexuality. There are still times when I question my own behaviours and wonder ‘why am I doing this thing, why am I performing, why am I saying yes to sex to when I know I don’t want it?’ Don’t we all though?

The assault was obviously really, really shit. But it’s also been – in this really weird, twisted turn of fate – the best thing that ever happened to me. Not just because of the sexual wellness business I’m building, but because of my own growth and development.

If you have been affected by any of the issues raised in this article, there are services that can help you. As a British blogger based in the UK, I have provided the NHS support page here which can direct you to the correct service for your needs: https://www.nhs.uk/live-well/sexual-health/help-after-rape-and-sexual-assault/