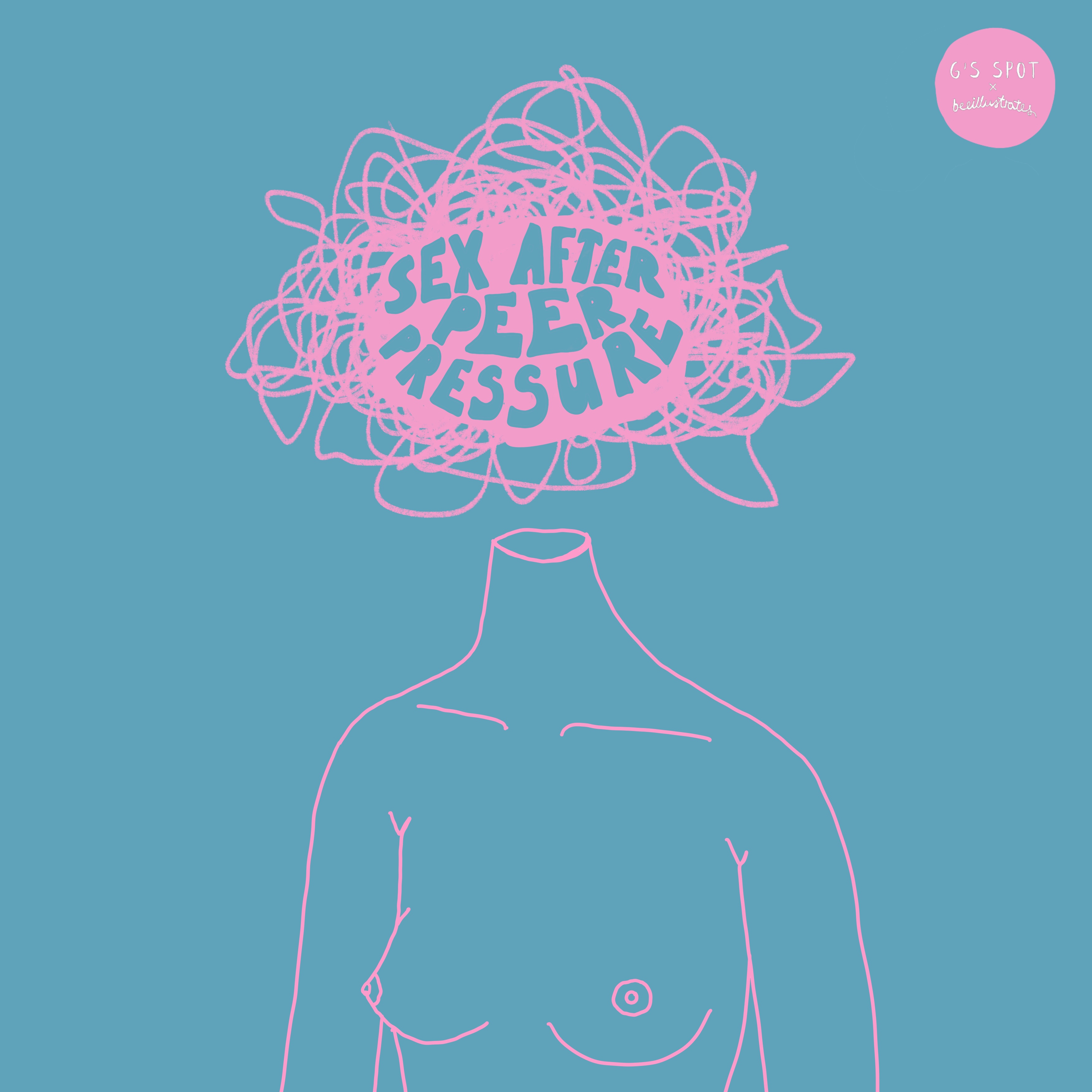 PRESSURE TO HAVE SEX

Where I grew up, it was incredibly popular to be having sex at a young age.

I remember the first girl to have sex in my year was thirteen years old.

I’d never been one to jump on the bandwagon, but going through puberty I think I was the only girl in my year that was too scared to even kiss anyone. The difference between my peers and myself became increasingly difficult.

I landed the nickname ‘frigid’ and I was well known throughout the school as someone who was just that: frigid.

Subsequently, boys at school weren’t interested in me because they felt that they couldn’t get what they wanted from me. If a boy did feign interest, I would usually eventually find out that there was a bet behind it, a challenge among friends to see who would get the furthest with me. This was compounded by my whole friendship group constantly reminding me how “boys don’t like girls who are frigid”…

HAVING SEX BECAUSE OF PEER PRESSURE

So when I met a guy I actually liked, I was totally convinced that sex would be the thing to get him to like me.

Fast-forward a bit: we got together and tried having sex. But every time we attempted to have sex, I got too scared and backed out. Eventually, he dumped me.

He agreed to take me back on the provision that I wouldn’t “chicken out” of having sex.

So he tried again, and the same thing happened: I got scared and pretended to be asleep. I remember him pushing my legs off his lap and turning over like he was incredibly pissed off.

As I lay there, I berated myself. I told myself to just get it over and done with, or he’d dump me again.

So I let him have sex with me.

And it was such a horrid experience… When he had finished, I turned over and cried myself to sleep.

Six years later, I know now that it was perfectly normal to be fifteen years old and not want to have sex! I gave in despite my reservations, and ultimately I regret it to this day.

Sex should be a mutual decision between the people involved, not the decision of your friends, your year group, or a boy who only cares about having his way with you.

SEX EDUCATION LET ME DOWN

Reflecting on that time, I recognise that sex education at my school was pretty poor. I remember having about three sex ed lessons and everything was pretty much skimmed over. I think that’s got a lot to answer for. I’m sure my relationship with sex as a teenager would have been different if I had absorbed more empowering messages about sex… Other than the “birds and the bees” talk with my parents and school, the most potent sex education I was receiving as a teen was from movies and some pretty unrealistic porn. I think sex education needs to be more thoroughly in schools: they give you the basics, but you’re not necessarily taught how to enjoy sex and navigate sexual relationships. From my experience, there was definitely the feeling that sex was something done to me as a girl, I didn’t get taught that sex was something I could enjoy just as much as men.

Sex is, unfortunately, still a taboo subject. Which is such a shame because I think the more open society is about sex, the easier it would be to learn about and talk about sex amongst ourselves. If sex wasn’t positioned as a huge deal, then maybe people would understand that it really doesn’t matter if you do or don’t have sex.

I really think it should be drilled in, early on in our sex education, that there is absolutely nothing wrong with being a virgin or waiting to have sex. I didn’t receive those messages, probably because of how rushed my sex ed was. Reframing the word “frigid” in a positive light could help alleviate the stigma. Obviously my first experience of the word “frigid” was a really negative one, but had I already known what it meant – aka that I didn’t have a desire to have sex at that moment in time – maybe I wouldn’t have perceived it as such a bad thing to be.

REFLECTING ON MY EXPERIENCE OF SEX AFTER PEER PRESSURE

I’m in a much better place now: you learn from your mistakes and after that experience, I vowed never to do anything for the sake of other people ever again. Six years on and I still stand by this resolutely.

These days, I’m definitely more positive about sex and I have a much better understanding of all the things I wasn’t taught at school. Going to university and meeting people who have little or no interest in sex made me realise that it’s not a bad thing to be a virgin in your 20s and it was never a bad thing to be a virgin at 14. In fact, it really doesn’t matter who’s a virgin and who’s not. It’s a personal choice, it’s nobody else’s business. I just wish I’d had a better understanding of sex when I was younger: it doesn’t feel right that I had to have a horrible experience in order to learn some fundamental lessons about intimacy and relationships. Virginity, consent, boundaries and pleasure are things that I should have been taught about from a young age by adults and teachers.

To anyone in a similar position I’d say just do what feels right for you. Never let anyone pressure you into doing something you don’t want to do. You make your own choices, and it’s nothing to do with anyone else what you do or don’t do with your body.

If you have been affected by any of the issues raised in this article about ‘Sex After Peer Pressure’, there are services that can help you. As a British blogger based in the UK, I have provided more information here about dealing with peer pressure, provided by the NHS.

Submissions for my ‘Sex After’ series are still open – please get in touch if you would like to share your story.